The EDULINK II Programme aims at fostering co-operation in the field of Higher Education between the countries of the African, Caribbean and Pacific Group of States (ACP States) and the European Union (EU), and at promoting innovation in Higher Education Institutions in the ACP Group of States member countries and, hence, at ensuring their competitiveness in the global environment.

PARTICIPIA specifically aims at developing and implementing innovative and competitive Master modules and/or programs in Participatory Integrated Assessment of Renewable Energy Systems in the ACP-member states Botswana, Namibia and South Africa. In this way, the action seeks to foster access to alternative energy technologies and their efficient utilization in different socio-economic and geographical contexts in Southern Africa.

The official start date of PARTICIPIA is 02 October 2013.

Consult our Project Fact Sheet, Promotional Flyer, or PROMO VIDEO for a quick overview of the Project. 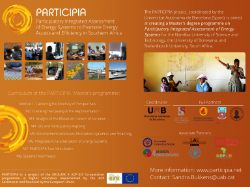